PROJECT 1
Do-it-yourself NVG Quick-Release Mount-  $7.95
GoPro makes a mount which fits into a night vision binocular review receiver plate found on police and military helmets, including the Sport version of the Ops-Core FAST helmet, which I use for PPG. 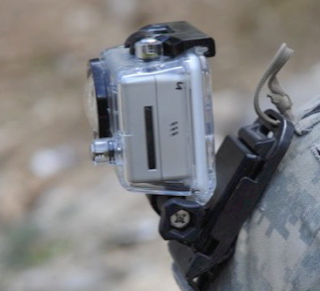 I've seen them for sell as low as 24 dollars and as high as 45 with shipping/local tax on top of that. But you can make one yourself that works as well, and in fact has certain advantages over the one GoPro makes.  Total cost about $7.95 inclusive. Video link here: http://www.youtube.com/watch?v=wZI6fdlHjEo

You need an NVG QD cover plate, (a universal adapter to integrate various, newer NVG styles to the most common mount, the venerable old-style US Army Rhino Mount. 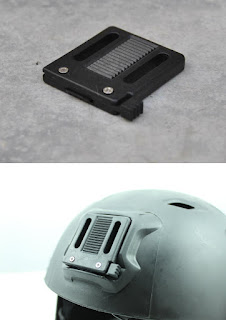 The chances are, that if you have a helmet with an NVG mounting plate already, then you already have one of these things.  If not, you can order a replica QD cover plate from one of the airsoft companies that abound on the internet. Try ebairsoft.   http://www.ebairsoft.com/cover-mount-p-5023.html
You'll also get one of these plates if you order an Ops-Core Base Jump helmet, and they are also included with some of the replica version FAST helmet knockoffs. See my review of the Ops-Core helmet here:
These replica Universal QD Plates, are designed for lightweight, dummy/replica, Airsoft NVG devices, but are more than robust enough to carry a GoPro camera.  I just stuck on a standard GoPro flat mount and that was that.  Because I don't trust the adhesive 100%, I backed it up with a countersunk #8 machine screw.

Now, why do I think that this an improvement over the Factory GoPro mount?  Apart from being less expensive, it's because I, (like a lot of other people I suspect) keep the camera more-or-less permanently attached to a J-hook buckle.  So it is the work of an instant to slip it out of one curved helmet mount, and into one on another helmet, or onto a tripod adapter plate, or a different adaptor plate on the end of my telescoping boom pole.

With GoPro's version, I'd have to unscrew the thumb turn post to change from one shooting platform to another.

NOTE: This mount will only work with the camera attached to the J-hook, and not the shorter quick-release buckle, as that one won't let the camera fold back far enough. 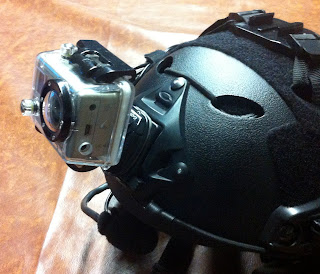 
PROJECT 2
Home Brew NVG Not-So-Quick Release Mount-  $0
Is your only flat mount being utilized somewhere else?  Another mount option, uses the more-or-less useless head strap mount that came with my GoPro helmet series.
I refer to the mount attached to the stretch nylon straps that let you attach the camera to one's bare head.  And I say useless, because I can't think of any activity worthy of being filmed with an action camera, that wouldn't be better off being filmed while wearing a helmet. 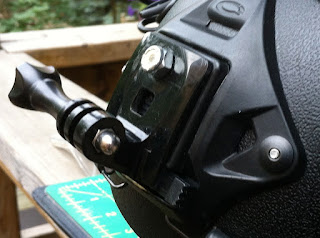 So I had no compunction about cannibalizing the thing thusly:

I carved it up with a cutting wheel on a Dremel tool.  The resulting plate has a concave curve to match the contours of a person's skull, or perhaps a borrowed helmet.  But it was simple enough to flatten it out a little.  Use the flat of a grinding wheel, or just spend a few minutes rubbing it against a piece of sandpaper.

I then drilled a hole through the mount and another black QD mount cover, and used a bolt and a Posi-lock nut to mate them together.  The nut will hold the thing pretty firmly by itself, but you can also use a little epoxy.  Not epoxy alone, however, as these plastics don't really like glue.  Epoxy, Gorilla Glue, J-B Weld, Industrial Contact-Cement... they'll add stability and support, but don't trust them alone. 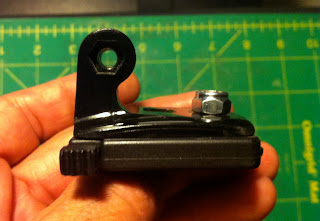 how to play darts baseball - Tóm tắt: I remember, as a kid, how much oil in honda lawn mower I used to play on a dartboard that had another recreation on its different aspect. This is a great follow recreation as a result of you'll be able to play it alone in addition to towards competitors. You should utilize both arms or controllers to throw darts - the hand tracking works quite effectively and, if something, capturing a bullseye with an aiming reticule seems a little bit easier in VR than it does in real life… It's not just a visible spectacle both - there's also quite a bit of nuance to the climbing mechanics, permitting you to half-grip, leap, use zip lines, bagger for craftsman riding mower keep away from breakable rocks and much more. Despite the title, Baseball Darts rules are a lot totally different from the common version of baseball .The identify comes from the truth that each games last 9innings.Number of Players Required: 1-Unlimited. Played solo, in pai 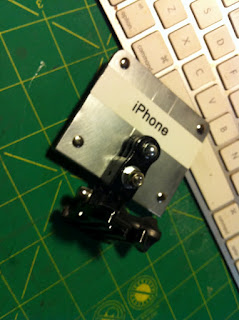 This project will allow you to use your iPhone as a helmet camera using the GoPro helmet mount as a mounting system. Here is a link to the youtube video: http://www.youtube.com/watch?v=leJv4hBYe80&feature=channel If you don’t already have a GoPro mount on your helmet, you can get one, and everything you’ll need for this project, (apart from a few easily obtainable “found” parts) in the so-called, “Grab Bag of Mounts” available from Amazon.com for about $17.00, or from any GoPro dealer. GoPro makes a very efficient sport camera, but there may be times when you will be glad of an auxiliary camera option for your helmet: such as, those times when you may be low on battery, or out of memory. Or you may want a redundant back-up for the shoot, with another camera recording option, or, you may simply have forgotten to bring your GoPro along. Chances are, you WILL have your iPhone along with you on most of these occasions, however, so pack this easy mount project along with your regular sp